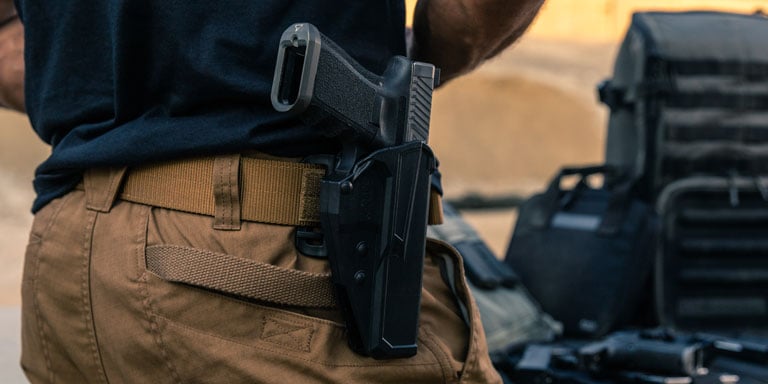 Most of us put a lot of thought into choosing the right handgun because it's an important decision. Unfortunately, many pick up a holster pretty much as an afterthought. It doesn't matter how good your pistol is if you can't rely on it being well protected, easy to handle and quick to get into action. It needs to be the right holster for you, your style of carry and your gun.

Concealed carry holsters don't just have to hold your weapon securely; they need to help make it as inconspicuous as possible. That means bulky flaps, padding and carriage systems are out; low-profile leather is in. There's also a limit to what a holster can do for concealment, and your choice of weapon is going to make a big difference. Opt for a long-barreled, large-frame revolver and your concealed carry options become very limited. 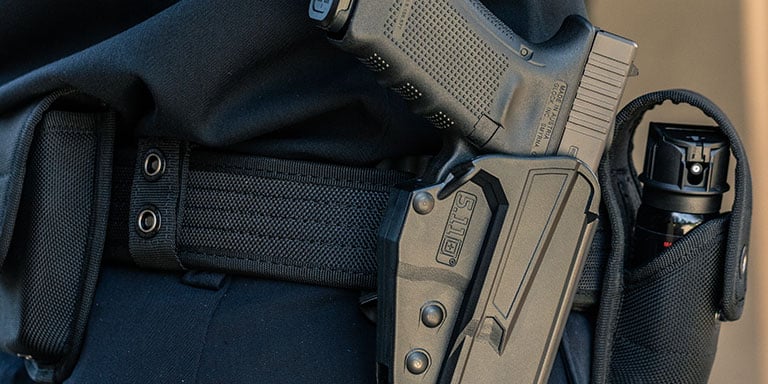 Belt holsters are the traditional military and police solution. An equipment belt or web gear is an ideal support for a holster, and keeps all your equipment together in one unit.

Police belt holsters usually have an open top and some kind of retention. This allows a quick draw, and with modern retention devices there's little chance of anyone else getting hold of the weapon.

Military belt holsters are a little different. For soldiers a quick draw is desirable, but less important than for a cop - few soldiers carry a handgun as their primary weapon, usually senior officers or non-combat specialists. Military handguns live a tough life, though. They're carried for long periods in dirty, muddy, wet, dusty or cold conditions. This means protection is the priority, so most holsters are full-flap designs that cover as much of the gun as possible. Shop Duty Holsters 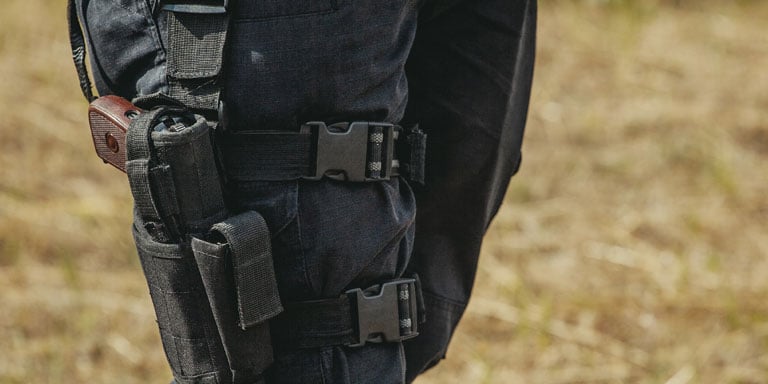 Belt holsters are great, but can be awkward to draw from — especially if you're sitting down. Drop your hand to your side and it's a good 18 inches away from the butt of a pistol holstered on your belt. Practice helps, but a drop leg holster is — in theory, anyway - a more intuitive way of doing it.

Drop leg holsters are suspended from your belt at around mid-thigh, and a strap round the thigh keeps them in place. Extension kits let most military belt holsters be converted to drop-leg. Kits usually contain a thigh panel with a PALS grid and attached retention straps. One big advantage is that they work well with body armor that's long enough to interfere with a belt holster. Learn more about the basics of body armor.

Drop leg holsters are controversial. Some find them easier to draw from, while others say they're more awkward in some positions. Shooters who've trained with belt holsters for years can find it hard to adjust. Drop leg holsters also don't hold the weapon as securely as a belt styles, so they tend to bounce around when you're running. When you're crawling the holster can work its way under your thigh and get dragged through the dirt. Shop Drop Leg Holsters 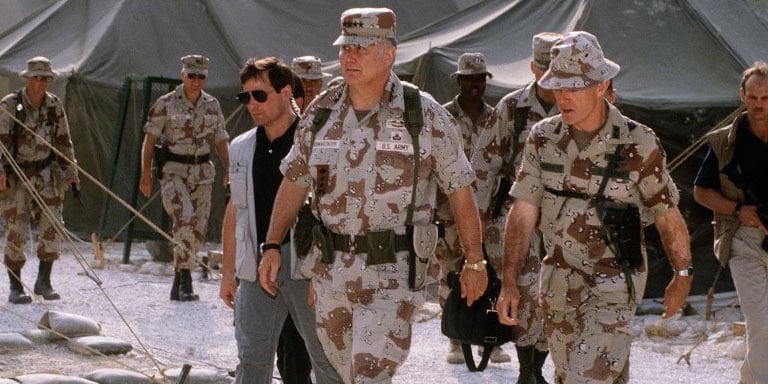 A shoulder holster doesn't work well with a full combat load — they become very awkward to draw from when you're reaching around armor loaded down with pouches. For troops who operate in lighter gear, on the other hand, they offer the same advantages as they do for open carry — weight is well distributed and it's easy to draw when sitting down or driving.

One thing to be aware of is that a shoulder holster worn over a uniform is pretty obvious, and thus can be interpreted as aggressive in certain situations. That's not important for everyone, but if you work in CIMIC or HUMINT — where you need to build good relations with local nationals — it can be a problem. Shop Shoulder Holsters 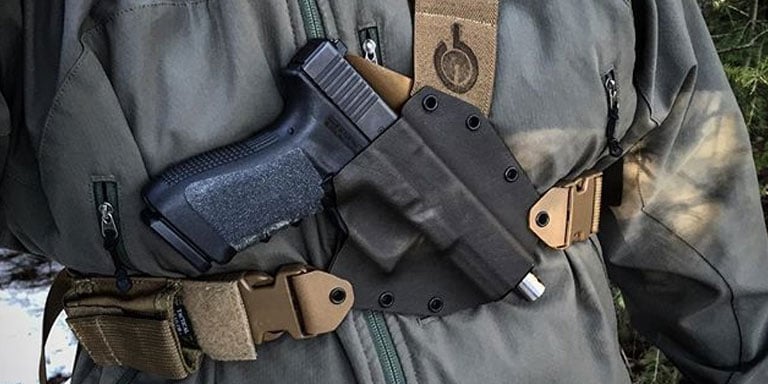 An alternative to shoulder holsters that works well with armor is a chest holster. These usually attach to the PALS grid on any MOLLE-compatible armor (learn more about how to use MOLLE). Positioned so the weapon's butt is over your sternum, they give a fairly easy draw. If you're a driver or vehicle crewman these are a good option. Shop Chest Holsters 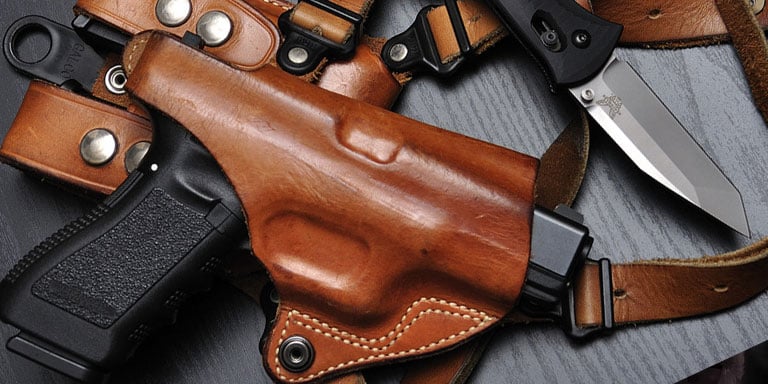 Leather is the traditional holster material, and it's still popular today. Leather is hard wearing, versatile and looks good. Modern leather holsters vary from traditional styles to stiffened, molded ones designed to fit a specific model of pistol.

Leather is a great choice for concealed carry. It's flexible and, with wear, molds to both the body and the weapon. A good leather holster doesn't add much bulk, which helps with concealment.

There are downsides, though. Leather is maintenance-heavy. Poorly maintained leather can collect moisture from rain or sweat, and you really don't want wet leather wrapped round your sidearm all day. It also collects scratches and gouges, which won't damage the holster's function but degrade its looks.

Leather also tends to soften and crease as it ages, and this can be dangerous. Plenty of people have holstered a pistol in old leather which folded, got inside the trigger guard and fired off a round. Shop Leather Holsters 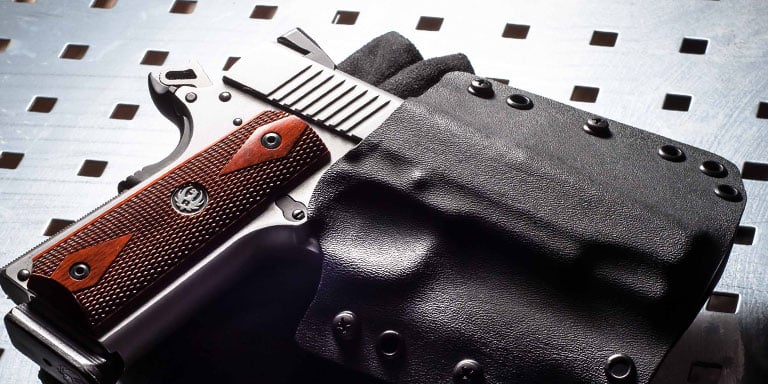 Kydex and other rigid plastics are excellent holster materials. They're tough, can be molded into just about any shape and really protect the weapon. Their rigidity also makes them ideal for holsters with retention systems. Usually they're shaped for a specific weapon.

The main drawback of rigid plastic is that it's often uncomfortable for concealed carry. It doesn't mold to your body the way leather does. Rigid holsters also tend to be bulkier and more obvious.

These materials are low maintenance and don't absorb water, sweat or dirt. Even if they're dripping with mud they can be easily cleaned. Shop Kydex Holsters 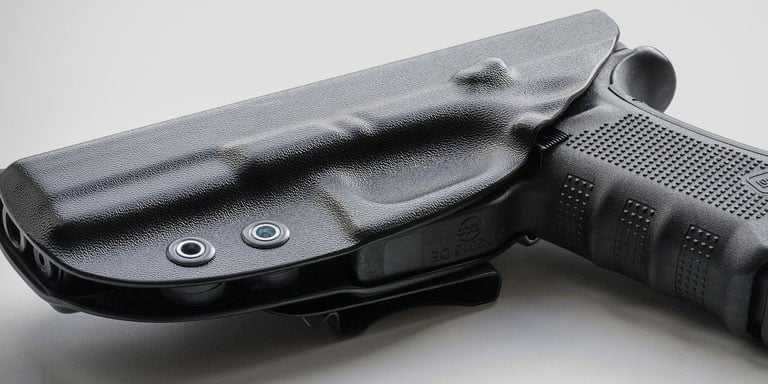 Many synthetic fabrics have been used to make holsters. Synthetic fabrics are (usually) tough and low maintenance. Their other properties put them somewhere between leather and Kydex.

A solidly made nylon holster is pretty bulky, so they're poor for concealed carry. They're also harder to keep clean than Kydex. They're generally more waterproof than leather, though, and protect the weapon well.

These holsters are also more forgiving of slightly different weapons then than they were specifically designed for. That's useful if you don't always carry the same model of pistol. Finally, they can be more comfortable than Kydex because they're less unyielding and offer some padding. Shop Synthetic Fabric Holsters

So your gun's in the holster. Now you need to make sure it stays there until you want it to come out — but when you do want it in your hand, it needs to be able to get there quickly. There's a variety of retention methods to make that happen.

Holsters are typically rated by retention level. A higher level means it's harder for someone to grab your weapon from the holster without your cooperation - but it also usually means your draw will be slower, so more retention isn't always better. The right level for you will depend on why you're carrying. If you're a cop or a civilian who open carries, someone trying to grab your weapon from the holster is a real worry. If you're a soldier, a flap that stops the weapon falling out should usually be fine.


There's no such thing as the best holster. The one that's best for you depends on a lot of things. Before buying, you need to know exactly what you need it to do. Once you've worked that out you can narrow the field down a lot. It can take a bit of work to make your final choice, but it's worth the effort. Get it right and you'll have a piece of equipment that will protect your weapon and make sure it's where you need it, when you need it. For in-depth firearm knowledge, check out the four rules of gun safety and learn about gun cleaning and maintenance basics.

HOW TO SET UP YOUR BATTLE BELT | EX-SF COMBAT MEDIC